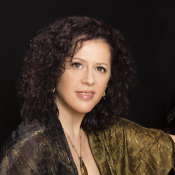 Milana is a multi-award winning pianist, composer and singer-songwriter, who has been a performing and recording artist since her childhood. A strong lyricist and composer in her own right, Milana’s style is reminiscent of Tori Amos, Sarah McLachlan, Michael Nyman, Keith Jarret and Chick Corea. Milana enjoys playing by ear, improvising and using whatever inspires her to create her own style of playing. She is known as an adept improviser, catching melodies on the fly and expanding them into her own creations.

Milana was born in Ukraine, lived in Israel for many years and moved to Canada in 2008. Having lived in different countries has enriched her musical experiences and storytelling. Her songs touch on issues of belonging, identity, the inner child, war and peace, and life and death. Soulful singing and complex piano melodies are Milana’s signature, but she embraces a variety of styles – everything from folk, blues, opera and Middle Eastern, to her soft spots for rock and jazz.

Milana has released eleven full-length albums (solo piano, original songs and New Age) and published three books with original scores for solo piano. Since 2012, in addition to performing live and releasing original albums, she has also taken piano and vocal performance in a commercial direction by doing session recordings, arranging, composing for films and online music libraries in her own studio located in Ottawa’s suburb. Milana provides full-service soundtrack and song production, as well as live-recorded piano on demand.

We open this chat in order to collect some evaluations about the user experience on the web. What aspects would you improve?
Anonymous4706

I have a new release I would like to submit. I am a member of Noise of Dreams. How do I go about submitting it for consideration?Regards, Rod Best
Noise of Dreams Network

You can send the song to each of the playlists, by clicking on the curators' profile. you can send us the song through the main page for the noise of dreams playlist, or you can send the release to highlight it in our artists and releases section
Filip Rachůnek

I have 5 volumes of instrumental music. Relax, chill, piano, guitar, synth or orchestral. All welcome.This is my album for any playlist consideration https://open.spotify.com/album/6CjelFMrogWmb01oIMcyMK?si=0gzYL0tsR9anOh2cQS_UUQ
Noise of Dreams Network

Is it possible to enlarge the chat window a bit? (vertically)
Anonymous5188

Do we now submit songs to playlist curators using the new chat functionality instead of messages? i no longer see the option to message them... only chat.
Noise of Dreams Network

done, is this ok so?
Noise of Dreams Network

For submissions, you can use both functions, but the chat will not reach the curator's email. I recommend using the functionality of the messages, available from the playlist section and in the profile of each user
Noise of Dreams Network

i guess i'm not seeing that option. from a user profile, the only contact method i see is "chat message" which launches a chat window like this.
Noise of Dreams Network

In the main menu / playlist, you can access to profile of each curator.
Noise of Dreams Network

look at the attached image
Noise of Dreams Network

once in the profile, send a private message
Anonymous5188

i no longer see the option to private message from a users profile. only to send a "chat message" like we're doing now.
Noise of Dreams Network

can you send a screen show of the private message functionality from a user profile?
Noise of Dreams Network

are you registered on the web
Noise of Dreams Network

oh boy... i was totally not logged in
Mark Swanson

thanks for the clarification. totally my fault
Mark Swanson

thanks for your help.
Noise of Dreams Network

private messages, have a notification to the user's email if it is enabled, the chat is only received on our web.
Noise of Dreams Network

This is great. It's better then facebook love it great job
Marc Vliegen

Thanks Marc, now you can click on the published links.
Amusin' Projects

I'm curious - how does this business model work? Where does Noise Of Dreams make cash from?
Noise of Dreams Network

I am a musician, like the rest of members. The web is the result of web development and contacts throughout a year. I feel it as a collective project and so I hope users feel it. The benefits are minimal. The server is maintained through contributions to PATREON and KOFI exclusively.
Noise of Dreams Network

you can support our project on Patreon
Noise of Dreams Network

You can also use it to share past concerts.

The next step would be to create our own server.

In this way, I believe that we can share and generate new audiences.

ok i cant figure out how to use the chat - I click a persons name on the list but it doesn't do anything?
Noise of Dreams Network

thanks shawn, i just reactivated the option to send private messages. Nusca is easy to hit with all users, there are those who value chat, and others for whom it is a problem. For me, chat is an added value for the web, so I will leave it active and also private messages through chat.
Shawn Dall

thank you!
Noise of Dreams Network

I'm afraid that is not possible, we will have to close windows or limit messages
Noise of Dreams Network

however i'm going to talk to developer
Shawn Dall

also how do I become a featured artist?
Shawn Dall

also ther ability for our friends to follow and get notifications from us would be nice - so when I post an update in "what's new, shawn/" - they maybe get a notification on the site
David Nicholas Slater

Hey guys, please can I check how artists submit tracks to Network Playlists? Is there a form or a button on the curator's profile page ... or is it just a case of sending them a private message? Cheers, Nick
Paul Adams

I'm afraid I am helpless in how to navigate this site. My left brain is tired
Paul Adams

I received an email from someone wanting me to place his song on a PL of mine. Email said to not respond directly to email. I clicked a link and ended up here. LOL I have no idea how to respond to the guy. Too bad, it was a nive piece
Paul Adams

OK there are two names associated w the email sent to me. One of them was Nick and I see above. So, LOL, nice piece nick and I'll add to the playlist
Paul Adams